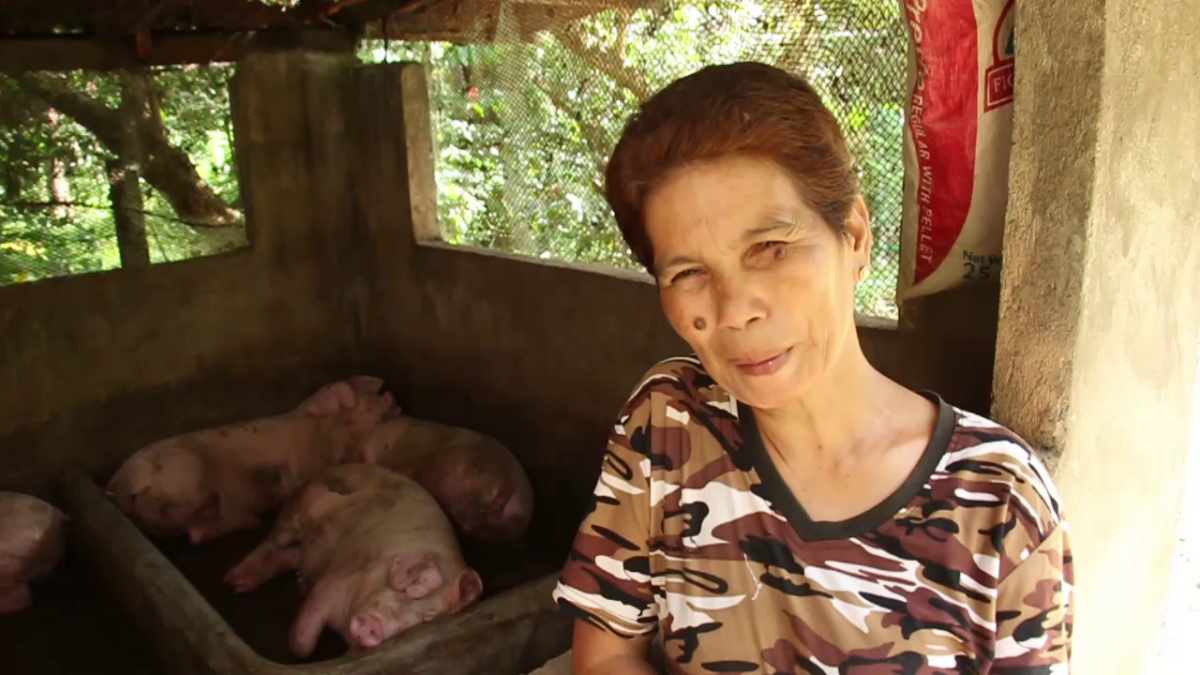 “Ang mga pinakikinabangan, kailangan pakisamahan, bigyan ng konswelo” (Those who were helpful should be treated well and given consideration.”)

Milagros Torrano of Quezon province has been a member of the TSPI Kabuhayan Program group under the TSPI Candelaria branch for more than 15 years. With an initial loan P5,000, she went into the buy-and-sell of hogs. Her current loan is P50,000.

This farmer’s wife with seven children used to be a laundrywoman. A cousin visiting from Batangas saw how the family was barely surviving on their combined meager income, and suggested she try her line of business, the buying and selling of hogs. Torano attended a training on hog raising facilitated by a livestock feeds company. Then, she started scouting for backyard hog raisers in their community and convinced them to buy/sell hogs on consignment basis. From ten hogs delivered to the market, she gradually had 30, and eventually started supplying even to her cousin.

Today “Nanay Mila” sources hogs from more than 40 backyard hog raisers in Candelaria, Sariaya, and Tiaong. When demand his high, she taps another supplier in Lucena. To further ensure sufficient supply, she started her own piggery, which now has 10 hogs. She supplies four major haulers who buy in bulk from Cavite, Commonwealth Avenue in Quezon City, and Montalban, three to four times a week at an average of 60 hogs per hauling. Hogs of poorer quality are sold to small haulers in Pasig who, in turn, sell to companies producing meat products like tocino, longganisa, and siomai.

Good interpersonal relationships make good business sense. Nanay Mila makes sure she pays backyard hog raisers on the spot. She gives bonuses to her driver and a secretary on their birthdays and at Christmas.“Ang pinakikinabangan, kailangan pakisamahan, bigyan ng konswelo  (Those who are helpful should be treated well, offered some consolation).”

She has not been spared challenges, however, such as when one of the haulers reneged on payment of over half-a-million pesos. She and her husband haled the hauler into court. The parties agreed that the hauler would pay in staggered sums, although Nanay Mila never fully recovered her losses. To stay afloat, she took out a loan from TSPI. She also borrowed from another hauler.

Nanay Mila has invested her remaining capital in a sari-sari store. She wants to hire another hauler and save P300, 000 to buy a second-hand truck. Now an expert in screening hogs for delivery, she shares her knowledge with the community and offers advice to backyard hog raisers. Not surprisingly, she is well-liked in the community. An active member of Munting Sambayanang Kristiyano (MSK) a church organization, Nanay often gets invited to stand as sponsor at baptisms, confirmations, and weddings. No wonder she’s fondly called “Ninang ng Bayan (national godmother).”